"Alpha Blending" means that you use partial transparency when rendering your image. It means that the alpha channel of your image contains any values within the range 0..1 (not just only 0 or 1). Alpha equal 0 means "completely transparent", alpha equal 1 means "complately opaque", values in-between mean "partially transparent". For example alpha value 0.25 means that when rendering, we should take 1/4 from the image color, and mix it with 3/4 of the current screen color at this place.

Alpha Blending makes sense both for user-interface (like images you place in TCastleImageControl), 2D games, 3D games (e.g. textures on your 3D models, that you load to TCastleScene). More info about alpha blending in CGE is here.

Now, "Alpha Bleeding" is an operation you sometimes need to perform on your images to make alpha blending work as you expect. Why?

Here's an example of a rendering bug caused by this, from this Trello ticket: 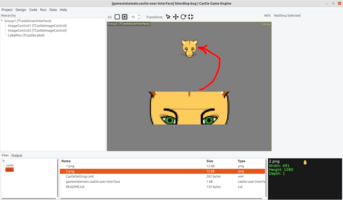 In the above example, one image is rendered in front of another. The front image has, however, black transparent pixels (RGBA = (0, 0, 0, 0)) very near the opaque light yellow pixels (RGB = light yellow, A = 1). And in effect they get averaged into dark yellow (black is averaged with light yellow). Which results in a dark smudge on the forehead of the character. Here are the actual images, the back and (incorrect) front:

Here's an analysis (investigating colors in GIMP) of the colors: 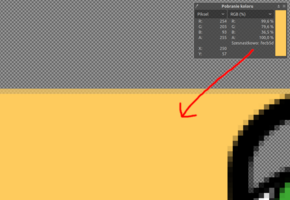 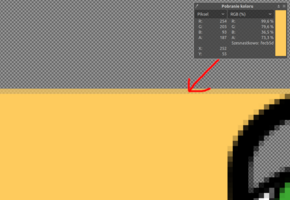 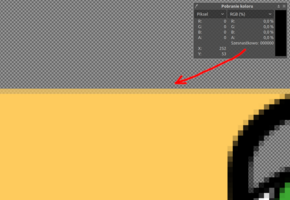 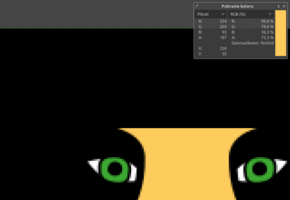 Where the opaque light yellow changes into transparent, you have

AD 3 is bad — these black RGB values get mixed into the final output.

In general, you can do this in various ways, various software for 2D image creation/processing can perform this.

Here's the resulting, fixed front image. You cannot really see a difference from the previous, incorrect image, by a human eye — you'd need to investigate the transparent pixels in GIMP to see the change.

Here's the result of mixing the 2 images, now correct, in the CGE editor. 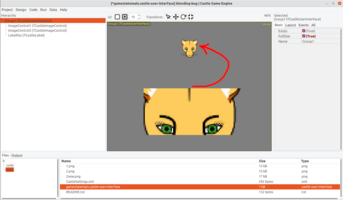 There's an alternative to this: you can also use filtering that doesn't average pixel colors. Just set TCastleImageControl.SmoothScaling to false, or set TDrawableImage.SmoothScaling to false, or use nearest filtering for textures in TCastleScene. This is good for pixel-art games usually (where you actually want to see "big pixels"), but not in general (you usually want smooth scaling, in most cases).

See this Trello ticket for a similar description, that also contains sample application with invalid image to play with.