In the last chapter, we created a TCastleScene instance. This is a very powerful class in our engine, it represents any non-trivial 3D or 2D object. You often load it's contents from the file using the Load method. To actually make it visible (and animated, and sometimes even interactive), you need to also add it to the Viewport.Items.

In this chapter, we will extend a little the code from the previous chapter, to add more functionality around the scene.

A complete program using the code shown here is in the engine examples, in the examples/3d_rendering_and_processing/cars_demo.lpr. If you get lost or are unsure where to place some code snippet, just look there:)

You can group and transform (move, rotate, scale) scenes using the TCastleTransform class. Actually, the TCastleScene is itself a descendant of TCastleTransform, so it can be transformed and can have children. Let's change the program from previous chapter to make the car (one 3D object) move along a road (another 3D object).

That's it, you have a moving object in your world, and the movement in 100% controlled by your code!

You can create any complex tree this way, using the TCastleTransform to build any transformation hierarchy that is comfortable.

Once you load a scene, you can play a "named animation" within it, using the PlayAnimation method. Open the model with view3dscene and look at the Animation -> Named Animations submenu to see what animations are available. We read animations from a variety of 2D and 3D formats (X3D, VRML, castle-anim-frames, Spine, MD3). 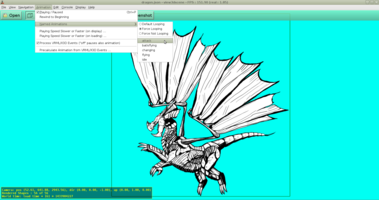 To play the animation called wheels_turning on our sample car model, do this sometime after loading the CarScene:

You should see now that the wheels of the car are turning. Tip: If you can't easily see the wheels, remember that you can move around in the scene using mouse dragging and mouse wheel. See view3dscene documentation of the "Examine" camera mode. Of course you can configure or disable the default camera navigation in your games (see previous manual chapter for camera description).

There are many other useful methods related to "named animations". See the HasAnimation, ForceAnimationPose and AnimationDuration methods. And if these are not enough, note that the animation is just an X3D TimeSensor node. You can access the underlying node using the AnimationTimeSensor method, and use or even edit this animation as you wish.

See the play_animation example in engine sources for a demo of PlayAnimation capabilities.

3. Control the existence of an object

Any object descending from TCastleTransform, including TCastleScene and TCastleTransform, has properties Exists, Visible, Collides and Pickable. Setting Exists to false makes the object behave like it would not be present in the Viewport.Items tree at all — it's not visible, it's not collidable.

For example, you can toggle the visibility of the car when user presses the 'c' key, like this:

4. Many instances of the same 3D object

It's allowed to add the same instance of the TCastleScene many times to your viewport items hierarchy. This allows to reuse it's data completely, which is great for both performance and the memory usage.

For example, let's make 20 cars moving along the road! You will need 20 instances of TCastleTransform, but only a single instance of the TCastleScene. The modifications to the code are straightforward, just add CarTransforms that is an array of TCastleTransform:

Note that all 20 cars are in the same state (they display the same animation). This is the limitation of this technique. If you need the scenes to be in a different state, then you will need different TCastleScene instances. You can efficiently create them e.g. using the TCastleScene.Clone method. In general, it's best to leave this optimization (sharing the same scene multiple times) only for completely static scenes (where you don't turn on ProcessEvents and thus you don't animate them in any way).

5. Building and editing the scene

Up to now, we have treated TCastleScene as a kind of "black box", that can be loaded from file and then changed using only high-level methods like PlayAnimation. But you have much more flexibility.

The TCastleSceneCore has a property RootNode that holds a scene graph of your scene. In simple cases, you can ignore it, it is automatically created when loading the model from file, and automatically changed by animations (much like the DOM tree of an HTML document changes during the page lifetime). For more advanced uses, you should know that this whole scene graph can be modified at runtime. This means that you can process the 3D models in any way you like, as often as you like, and you can even build a complete renderable 3D object by code — without the need to load it from an external file. You can also build complicated 3D objects from simple ones.

Our scene graph is composed from X3D nodes organized into a tree. X3D is a standard for 3D graphics — basically, the guys designing X3D specification have proposed a set of 3D nodes, with sensible operations, and they documented it in great detail. Our engine implements very large part of the X3D specification, we also add some extensions for cool graphic effects like shadows, shader effects and bump mapping.

Here's an example of building a scene with two simple boxes. It shows nice transparent walls around our road. It uses the RoadScene.BoundingBox value to adjust wall sizes and positions to the road 3D model.

Note: in this case, it would probably be simpler to add these 2 walls (boxes) to the road.x3d file in Blender. Thus, you would not need to deal with them in code. But in general, this technique is extremely powerful to generate 3D scenes following any algorithm!

To construct a more flexible mesh than just a box, you can use a universal and powerful IndexedFaceSet node instead of a simple Box. For IndexedFaceSet, you explicitly specify the positions of the vertexes, and how they connect to form faces.

You can create descendants to customize all the classes mentioned here. These descendants can override methods e.g. to collide or perform AI (move itself in the world).

Every object (a descendant of TCastleTransform, like TCastleScene or TCastleTransform) "knows" it's World so it knows how to move and collide within the 3D world. This opens various ways how you can implement "artificial intelligence" of a creature, for example:

In fact, this is how our creatures with ready AI are implemented:) But you can do it yourself.

Basically, you don't need to learn anything new for 2D games.

Copyright Michalis Kamburelis and other Castle Game Engine developers.
Thank you to Paweł Wojciechowicz from Cat-astrophe Games for various graphics.
This documentation is also open-source and you can even redistribute it on open-source terms.